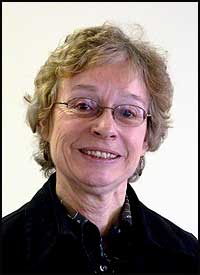 Joan Calkins completed her Bachelor of Science in Nursing at UW-Madison and has worked with students until retiring officially in 2007. She began work at the old Wisconsin General Hospital and was promoted to Nursing supervisor when University Health Services separated from the hospital to become a separate ambulatory unit.

Joan has been involved in various roles as Nursing supervisor, Clinic coordinator, study abroad programs, Occupational health for the campus, etc. and is certified in Travel health and College Health Nursing. She grew up in northern Wisconsin and except for a year in Milwaukee, has lived in Madison since 1963.

Other activities, interests and organizations,besides the UW-Madison Retirement Association where she has completed her term as president include the Friendship Force, Foreign Foods, Travel Medicine group, Garden club, travel and boating. She and her husband were involved with the water activities for Paddle and Portage and Ironman for many years. Joan was married to Dean for 43 years until his sudden death in 2007. We have two daughters and one grandson.