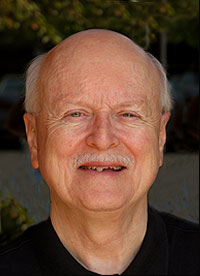 Buzz, born in Milwaukee-raised in Wauwatosa, graduated with a BS in political science, UW- Milw. 1965, a Masters in Urban Affairs, UW-Milw. 1972 and a Masters in Public Administra- tion, Syracuse Univ. NY 1973. He and his wife Kay, a retired school administrator, live in Stoughton, WI and have one son Brett, presently in grad school.