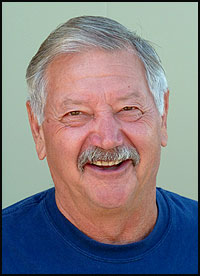 TOM SPERANZA began his career as a professional firefigher with the city of Madison in 1965. His first assignment was at station #3, located on Williamson St.

In 1980, he was appointed a Lieutenant and worked for the next five years at stations # 5, #6 and #8. Tom served on the Professional Firefighters of Wisconsin's Executive Board from 1981-1989. In 1989, he was elected President of the Madison Local 311 Firefighters Union, a position he held for two years. While on the Madison Fire Department, Tom was involved with the promotional and legislative committees. In 1965, he was a member of the Bargaining Team.

Tom retired in 1997 with over 32 years of professional firefighting experience. For the last eight years, Tom has served as a Coalition of Annui- tants Director, representing the Retired Professional Firefighters Association of Wisconsin.

Tom has always been involved and interested in sports. Besides being an avid Badger and Packers fan, he also played softball and baseball until he was 60 years of age.

Tom enjoys wintering at his home in Florida.