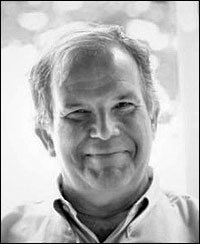 Chuck was born in 1947 in St. Joseph, MO, to Roger and Doris (Warner) Howard. He was the youngest of four siblings. He played football in high school, and he graduated from the University of Missouri in 1970 with a degree in Education and a minor in Journalism. He later received a Master's in Curriculum and Instruction from the

University of Wisconsin-Milwaukee in 1989. Until his retirement in 2005, he spent most of his career teaching English at Milwaukee Trade and Technical High School. He was a member of the writing team that framed the school to be recognized as an Exemplary Blue Ribbon School by the US Office of Education, a team leader for the School to Work educational pathway, and an advisor for the school newspaper, The Craftsman. He was an active and enthusiastic member of the Wisconsin Education Association Council and the Milwaukee Teachers Education Association (MTEA), where he served as president from 1987 to 1990.

After he completed his stint as president of the MTEA, Chuck was elected to the National Education Association Board of Directors, where he made many new friends from around the country. Frequent trips to Washington, DC eventually turned into world travel with friends and family as he moved into retirement. Chuck visited such places as France, Switzerland, Ireland, Puerto Rico, Grand Manan Island, the Netherlands, and Belgium. In 2009, he and about two-dozen friends spent a week walking across England at Hadrian's Wall. With retirement came regular meetings of the "Council of Elders," consisting of Chuck and a group of peers from his union years. In addition to travel, he loved to read (he had an insatiable appetite for mysteries), and to hear and tell stories. He was a die-hard Democrat, passionate about education, and an instinctive supporter and defender of the underprivileged.

Chuck was married twice. In the end, however, no woman could hold him. He was cherished by his family, students, colleagues, and many, many friends for his warmth, intelligence, generosity, outgoing nature, easy laugh, terrific sense of humor, and wide-ranging curiosity. When he asked you a question, he really listened to the answer, and he asked great questions. His ability to listen, to adapt to different roles, to keep an even keel, and to keep a confidence made him a loyal and reliable friend whose companionship will be greatly missed.

He is survived by brothers Roger and Hugh; sister Judith Robinette; many cousins, nieces, nephews, great-nieces and nephews; and his very loving cat, Bo. He is predeceased by his parents and his brother-in-law, Ronald Robinette. In remembrance of Chuck's life, the family asks that any charitable donations be made to The Milwaukee Center for Teaching, Learning and Public Education at 5130 W. Vliet St. Milwaukee, WI 53208. 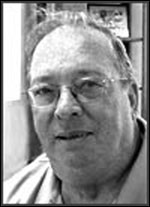 in Caledonia from 10:30 AM until the time of service at 11:30 AM. Interment at Southern Wisconsin Veterans Memorial Cemetery. 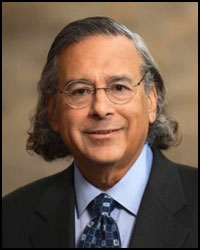 He was born in Albuquerque, N.M., on April 13, 1954, to Federico Juan and Maria (née Yrene) Villa. He graduated from Princeton University with a B.A. in economics; for his thesis he wrote a case study of Peru's financial system and its role in promoting economic development. This led him to an M.A. in Latin American studies at Stanford, after which he got an

MBA from the Kellogg Business School at Northwestern University while interning for the Dean of students. He also obtained a CFA (the credential for investment professionals) and a CPA. It was at Kellogg that he met Jane (née Harney) whom he married in 1979 at the Howe Chapel at Northwestern University. They traveled extensively and lived in London, Strasbourg, Chicago, Tallahassee, and Madison. Their daughter, Elena, has been the light of their lives.

His passions were his family, music and widening educational opportunities. He left high school after his junior year to travel and perform with "Up With People" throughout the United States and Belgium. During a lecture at the United Nations for his "Up With People" group, a Princeton professor heard a question David asked. David was blessed by good fortune and kindness at that important point in his career (and many others): recognizing David's remarkable mind, that professor secured funding for David to attend Princeton in the fall. There he joined the a capella group the Nassoons, where he sang second tenor. The Nassoons provided him with enduring friendships, wonderful memories, and a chance to sing together throughout his life.

MBA in hand, David became an auditor with Arthur Anderson. He served subsequently in a series of increasingly demanding roles in finance at First National Bank of Chicago, Brinson Partners, and the Florida State Board of Administration (Florida's pension fund) before coming to SWIB.

He enjoyed the challenge and complexity of SWIB and its mission that Wisconsin public employees and their families retire with dignity. Under his leadership, SWIB became a true asset management firm. It more than doubled in size in terms of personnel and funds under management. This has dramatically reduced the cost to the pensioners of managing funds (as the cost of external management is much, much higher than internal management). He recruited talented employees and encouraged them to develop their skills by learning throughout their lives and to serve their community. These people have contributed their time and money in the Madison area, something that outside fund managers didn't do. As of David's death, Wisconsin's pension fund is overfunded. (The fund has more than enough assets to meet their future obligations.) David received numerous awards for innovation and leadership in the finance industry including those from Institutional Investor and CIO magazines. He was highly respected by his many colleagues and friends.

David sought to share his love of learning. He had clear goals and sought to form coalitions to accomplish them. There have been numerous articles and letters to the family from the many people he mentored and the many lives he touched in his activities. David enjoyed his work as Treasurer and Director of the Marguerite Casey Foundation, whose mission is to empower low-income families to organize to improve their communities. (As opposed to the grant model wherein the donor monitors and to various degrees directs the recipient's activities.) He co-directed the Proyecto Amistad in Arequipa, Peru while in college. As President of the Chicago Chapter of the National Society of Hispanic MBAs (now Prospanica). he worked to fund a summer program for talented Hispanic middle school students. In Madison, he built a partnership with the UW Business School that has permanently changed their relationship. The latest example of this is that he encouraged SWIB funding for a scholarship for women to intern at SWIB and study in the Applied Securities Analysis Program at UW. (Women are underrepresented in the financial industry.) With his wife, Jane, he funded numerous endowments and scholarships to encourage others to reach their potential and widen the talent pool in many industries.

At the time of his death, David served as a Director of the Financial Accounting Foundation, a part of the SEC and as a CEO/CIO of the State of Wisconsin Investment Board and as Treasurer and a Director of the Marguerite Casey Foundation. He was a member of the 300 Club, a group headquartered in London, formed in the aftermath of the 2008 financial crisis and dedicated to increasing transparency in accounting and investing to the world of international investments.

David is survived by his wife, Jane; and daughter, Elena; his parents, Fred and Maria Villa (97 and 94); and his siblings, Debora (Ralph) Villa, M.D., Doreen (Steve) Simmons, Dan Villa, and their children. He was a treasured brother-in-law to Caroline Harney (Jim Charlton), Ed Harney (Kathryn Mikells), and Tom Harney (Laura,) and uncle to their children.

His survivors are inspired by the courage and passion with which he lived his life and faced his death. They will miss his jokes, loving support and endless wisdom. We are honored and blessed to have known him.

His memorial service will be on Saturday, March 20 at 2 p.m., via a livestream link. Please go to David's obituary on www.cressfuneralservice.com. Click on the link for access and to share your memories. 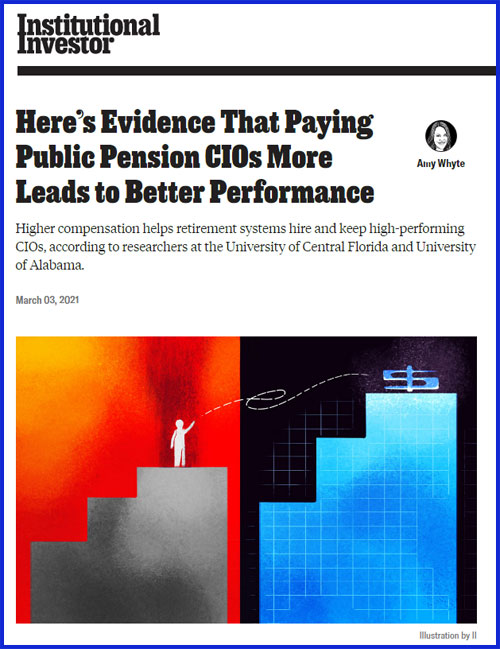 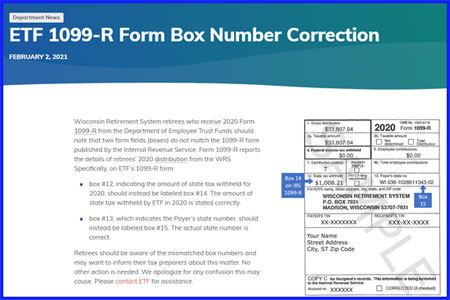 Wisconsin Retirement System retirees who receive 2020 Form 1099-R from the Department of Employee Trust Funds should note that two form fields (boxes) do not match the 1099-R form published by the Internal Revenue Service. Form 1099-R reports the details of retirees 2020 distribution from the WRS.

box #13, which indicates the Payers state number, should instead be labeled box #15. The actual state number is correct.


Retirees should be aware of the mismatched box numbers and may want to inform their tax preparers about this matter. No other action is needed. We apologize for any confusion this may cause.


. . . go here to the ETF site for more information 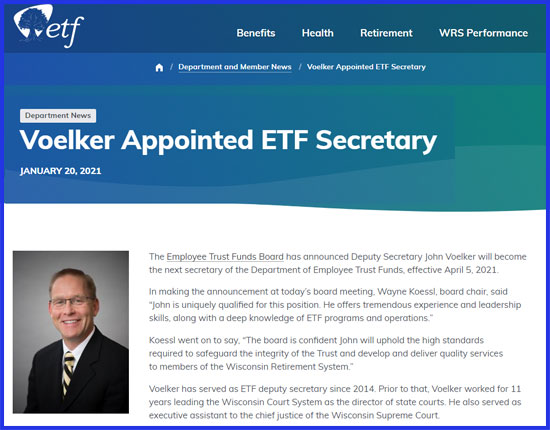 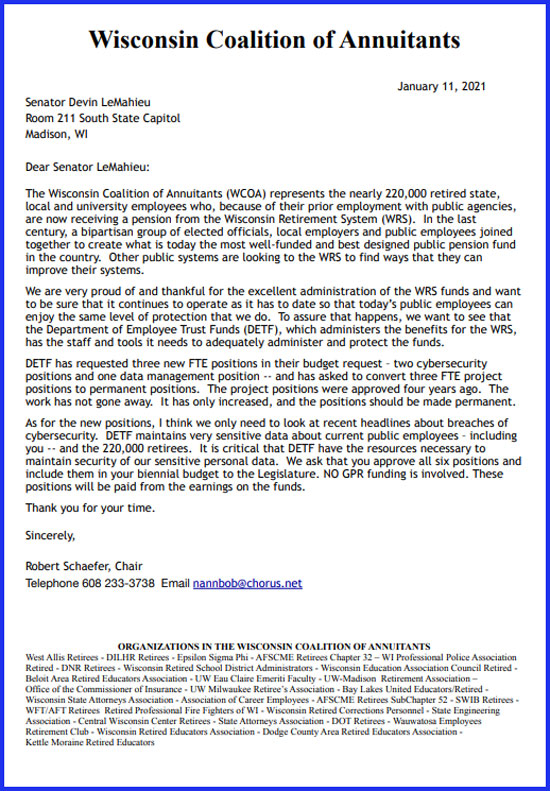 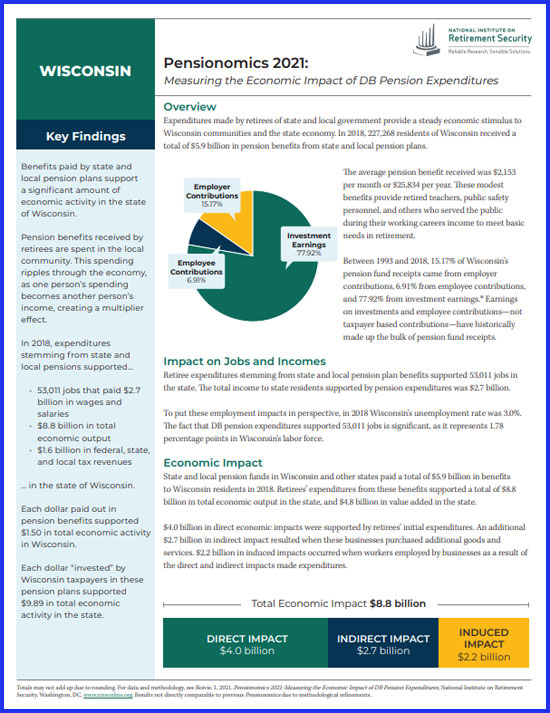 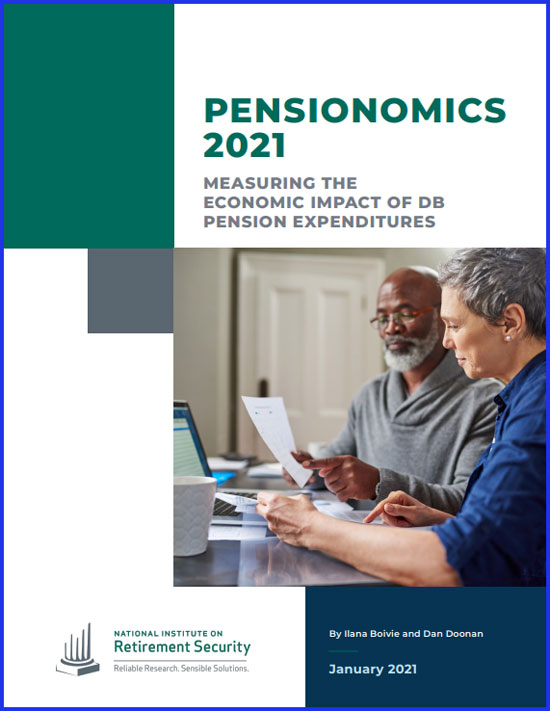